ASTM D7183 test method covers the determination of the Total Sulfur content in aromatic hydrocarbons and related chemicals by combustion and UV-Fluorescence. The method has been tested in the concentration range from 0.5 to 100 mg/kg S. To determine conformance with product specifications, test results shall be rounded off in accordance with the Practice E 29. The values in SI units are to be regarded as standard. No other units of measurement are included in the standard in the ASTM D7183 procedure.

D7183 provides the required stability and sensitivity for the reliable determination of total sulfur content in pure hydrocarbons. The controlled and complete combustion of the sample convert all bound sulfur compounds into sulfur dioxide. The method benefits from the advantage that SO2 absorbs the UV light fast and quantitatively forming excited SO2* species that readily relax to its ground state releasing its excess energy. The released energy is proportional to the total S concentration and is captured by a PMT which is set at the violet/blue region of the spectrum. The envelop of energies released by the relaxation of SO2* lies in the 340 – 420 nm region. It was found that the sensitivity greatly increases by optically selecting the excitation energy envelope narrow enough to minimize interferences from other species that might fluoresce in the same region. At these wavelengths around 220 nm the reaction ratio towards nitrogen is minimal so in the case of high nitrogen concentration samples the bias can be significantly reduced to less than 1%.

Sulfur is present in traces amounts in aromatic hydrocarbons. Its determination is important due to several factors: It degrades the activity of expensive catalysts especially platinum based ones used in catalytic processes were pure aromatic hydrocarbons are the starting material for important synthesis of polymers.

A measured quantity of a chemical specimen is introduced into a carrier gas stream, at a controlled rate by an automatic syringe sample changer and incorporated into a high temperature furnace (900 to 1150 °C) were an excess of pure oxygen is added. Pyrolysis converts hydrocarbons in the specimen to CO2 and H2O. Organic and inorganic sulfur compounds present in the sample are converted into sulfur dioxide (SO2). After the gases exit the combustion zone they are passed through a semipermeable Nafion® membrane dryer where the water is quantitatively removed. The gases pass then to a reaction cell where they are excited by a UV light.

The dry gases containing the excited SO2* species fluoresce upon relaxation releasing an amount of energy proportional to the S original concentration. The relaxation takes a few nanoseconds and the energy captured by a Photo Multiplier Tube, is filtered, amplified and recorded. The signal obtained is compared to a previously prepared calibration curve for the final quantification of the unknown sample.

The vertical configuration analyzer for the analysis of liquid volatile organic compounds is represented in fig.1. The system is provided with an automatic sample changer and a non-oxidative vaporization inlet system 1; a dual zone combustion furnace 2 that holds the pyrotube; the membrane dryer 3; a precautionary particle filter 4; the reaction cell 5; the detector module 6; and the signal acquisition and processing unit 7. The configuration of the pyrotube in the furnace hottest zone has an spiral inner tube that meets a countercurrent secondary stream of oxygen to allow for extra residence time and extra oxygen to provide complete combustion conditions necessary to achieve the stability to hold for long periods the calibration and to maximize the signal to noise ratio for a low LOQ. 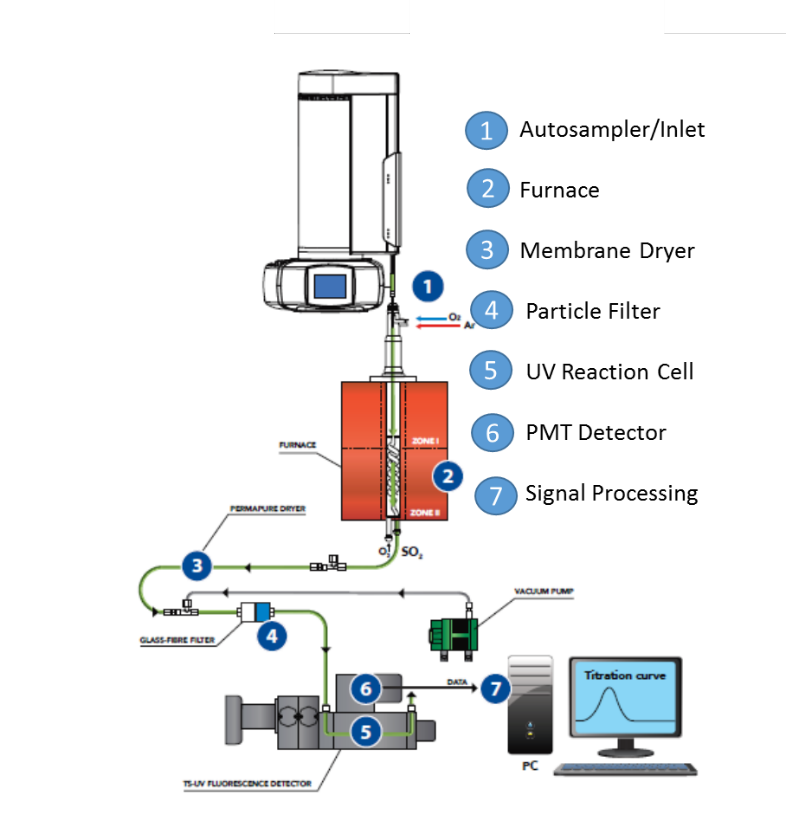 Apparatus preparation and calibration: Once the system has been assembled, leak tested, heated and stabilized per the instrument manufacturer instructions, the optimum operating conditions are stablished and adjusted as per the manufacturer’s guidelines.

Two important characteristics of this technique are: equimolarity and linear response. The first means that any organic compound containing at least one bound atom of S can serve as a calibration compound and the second means that the calibration can proceed with a minimum of three points which will increase the speed of the analysis. Based on anticipated sulfur concentrations needs the instrument is then calibrated either by dilution of a stock solution or by using a calibration kit from commercial standard reference laboratories. The calibration method is set to average three consecutive injections for each calibration point. Check the linear regression coefficient of the obtained calibration curve and make the necessary corrections should the linearity not be in accordance with ASTM D7183 and the manufacturer’s instructions (R2 ≥ 0.99). It is a good laboratory practice to start the calibration in ascending order to reduce risk of carryover that could affect the linearity of the calibration. Should the linear regression coefficient fall below the required linearity, check the instrument status, the injections and calibration standards replace as necessary and rerun the calibration. Some instrument like the one displayed in Fig.1 have a software with an auto dilution function that allows the use of a single stock solution for the entire calibration range eliminating risks of errors in the dilution process.

Analysis: Prepare a sequence of analysis for the samples to be analyzed under the same unaltered experimental conditions and again take the average of three consecutive injections. Sulfur concentrations of the unknown samples should fall in the calibration range. Perform dilutions on gravimetric or volumetric basis if necessary. Measure the response of the system for the test solution and inspect the combustion tube and the flow tubing of the instrument after the sample analysis to verify complete combustion. Soot should not be detected. In case the soot formation is detected care should be taking by reducing sample size, sampling rate, temperatures and flows. After thoroughly cleaning the systems as per manufacturer’s instructions recalibrate if instrumental parameters change and reanalyze samples. Densities needed for the calculations are to be measured by ASTM Test Methods D1298 and D4052 at the test temperature.

The precision for ASTM D7183 was obtained based on practice E 691. A 2004 Research Report D16-1035 obtain data from 19 participants on 5 different sample types and concentrations ranging from 0.5 to 0.9 mg/kg. Additionally, 25 laboratories also evaluated 3 samples ranging from 15 to 90 mg/kg S.

Repeatability—The difference between two test results obtained by the same operator with the same apparatus under constant operating conditions on identical test material would, in the long run, in the normal and correct operation of the test method, provide the following repeatability values: 0.083 and 0.063 for 0.5 and 0.9 mgS/kg respectively. The 3 levels of 15.69, 67.1 and 94.34 mg S/kg produced values of 1.61, 7.1 and 8.14 respectively.

Reproducibility—The difference between two single and independent test results obtained by different operators working in different laboratories on identical test material would, in the long run, in the normal and correct operation of the test method, exceed the following values in only one case in twenty, where X = the average of the two test results. The same concentration levels reported above, rendered reproducibility values of0.216; 0.28, 6.1, 21.73 and 20.87 respectively.

Bias— To be Determined

Experimental values and QC/QA control samples should fall within the precision estimates of the method or comply with the general equations for r” and R” as described above. It is recommended to follow Guide D 6809 to help ensure the quality of data generated by this test method.