In an attempt to avoid serious operational problems in machinery and hydraulic fluid power equipment ISO 4406 test method is used to count and measure the size of dispersed Solid Particle Contaminants, always present in hydraulic fluids, in the overall range from 4 µm to or larger than 15 µm. ISO 4406 uses Automatic Particle Counter (APC) and microscope sizing and counting.

A reliable determination of size and particle distribution in hydraulic fluids and other products constitutes a valuable tool not only to more precisely determine the product specifications but also to monitor fuels and in-service oils and optimize preventive maintenance programs of engines and machinery reducing downtime and repair costs avoiding unnecessary unscheduled costly repairs. Particles can shorten the lifetime of fuel systems components, fuel pumps, injectors and other devices.

Particle counts are affected by a variety of factors. These factors include procurement of sample, particle counting accuracy and the sample container (where used), and its cleanliness. Proper care should be taken during sample procurement to ensure that the sample obtained is representative of the fluid circulating in the system.
The optical PAMAS particle counters exceed the requirements of common cleanliness standards and provide a detailed particle size distribution for up to 32 size areas. The measuring result of an optical particle counter includes as well important ranges that are not covered by International standards such as ASTM, ISO and SAE among others.

particles, n—solid particles and dispersed water droplets which are detected and counted by this test method.

Discussion—Automatic particle counters may also count the total number of particles per mL, in size bands, in addition to those up to ≥100 µm.

ISO Codes, n—a standard method for coding the level of contamination by particles.

Discussion—Results are expressed by ISO Codes as specified by ISO 4406. These codes are written in the form of x/y/z, where x, y and z are ISO Codes equivalent to the cumulative counts, per mL, for particle size bands ≥4 µm(c), ≥6 µm(c), and ≥14 µm(c) respectively.

NOTE 5—All particle counts are per milliliter.

coincidence error limit, n—the highest concentration of ISO ultrafine test dust (ISO 12103-A1 or ISO UFTD) that can be counted with an automatic particle counter with less than 5 % error resulting from the presence of more than one particle in the sensor/laser optical path at a time.

The original code, in accordance with the first edition of this document, stated the reporting at two sizes ≥ 5 µm and ≥ 15 µm. The sizes in this document account for the use of a different calibration standard for optical automatic particle counters (APCs). The reported sizes are ≥ 4 µm(c), ≥ 6 µm(c) and ≥ 14 µm(c), the last two of these being equivalent to the 5 µm and 15 µm particle sizes obtained using the ISO 4402:19911) method of calibrating APCs. Throughout this document the use of µm(c) means that particle size measurements are carried out using an automatic particle counter that has been calibrated in accordance with ISO 11171.

Measurement of particles using an optical microscope as specified in ISO 4407 establishes the size of a particle as being equal to its longest dimension, whereas an automatic particle counter derives the size of an equivalent particle from its cross-sectional area, a value different in most cases from that determined with a microscope. The particle size to be reported for measurements by microscope 5 m and 15m are unchanged from those specified in the first edition of ISO 4406.

Test Specimen Container, cylindrical, made of glass or other suitable material, of at least 125 mL volume with provision for holding the test specimen input tube at least 10 mm above the bottom of the container, and a cap with a suitable inert internal seal. 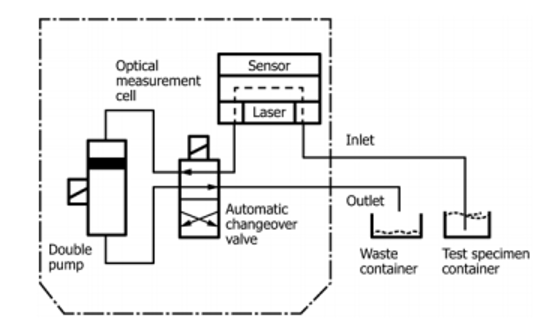 Verification:
Follow the manufacturer’s instructions to prepare the verification fluid.

The code for contamination levels using automatic particle counters comprises three scale numbers that permit the differentiation of the dimension and the distribution of the particles as follows:

The scale numbers are allocated according to the number of particles counted per milliliter of the fluid sample (see Table 1).

A step ratio of generally two, as given between the upper and lower limits for the number of particles per milliliter in Table 1, has been adopted to keep the number of scale numbers within a reasonable limit and to ensure that each step is meaningful. 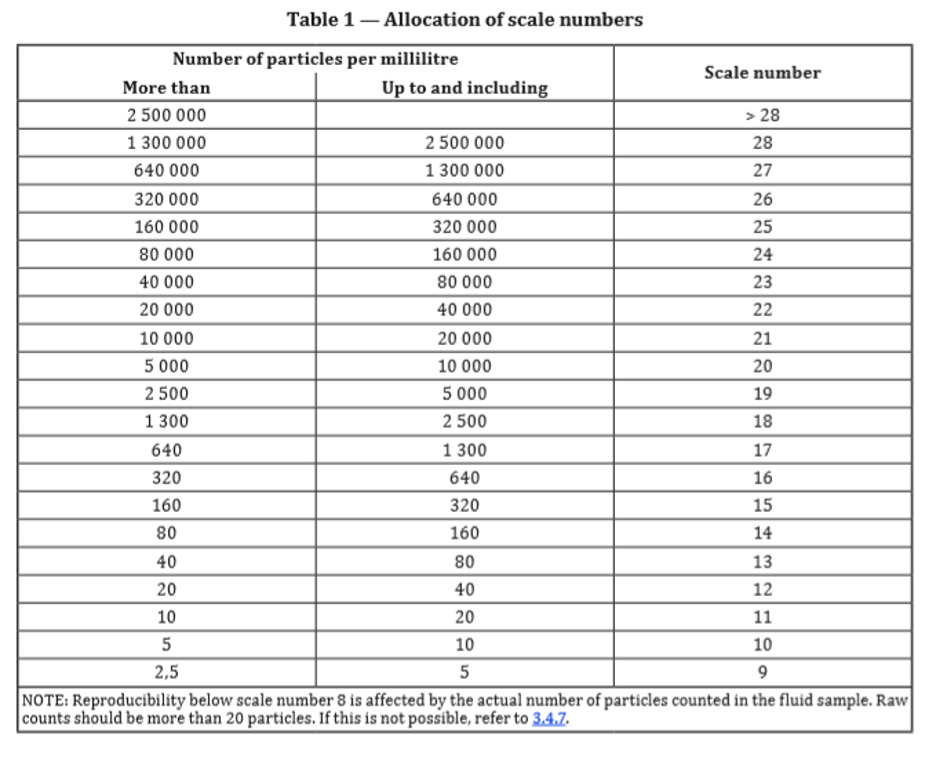 Counting shall be undertaken in accordance with ISO 11500 or another recognized method, using an APC calibrated to ISO 11171.

– A scale number shall be allocated to the number of particles equal to or larger than 4 µm(c).

– A second scale number shall be allocated to the number of particles equal to or larger than 6 µm(c).

– A third scale number shall be allocated to the number of particles equal to or larger than 14 µm(c).

– The three numbers shall be written one after the other and separated by oblique strokes (slashes).

Graphical presentation of ISO Code results shall be as described below.

When applicable, include either *” (too numerous to count) or —” (no requirement to count) notation when reporting the scale number.

EXAMPLE 1 */19/14 means that this sample has too many particles equal to or larger than 4 µm(c) to count.

EXAMPLE 2 —/19/14 means that there was no requirement to count particles equal to or larger than 4 µm(c).

When the raw data in one of the size ranges results in a particle count of fewer than 20 particles, the scale number for that size range shall be labelled with the symbol ≥.

Graphical presentation of ISO Code results shall be as described below.

Identification statement (reference to this document) Use the following statement in test reports, catalogues and sales literature when electing to comply with this document:

Graphical presentations of the code number

For automatic particle counter analysis, report the contaminant code by:

For analysis by microscope, use _” in place of the first scale number and allocate the second and third numbers based upon the counts at 5 µm and 15 µm respectively.

Interpolation is acceptable. Extrapolation is not permissible.
In cases of dispute also report the instrument model used and software version installed. 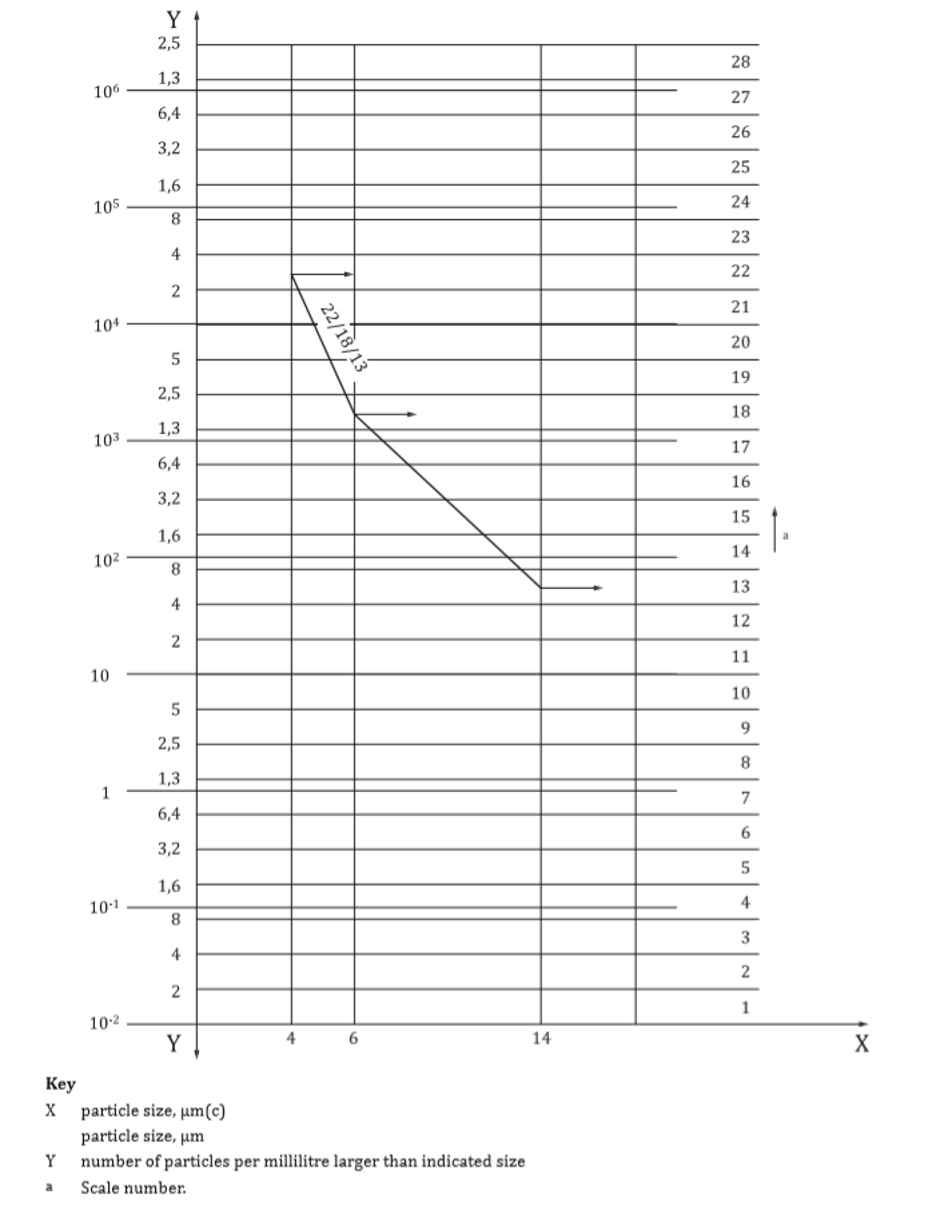 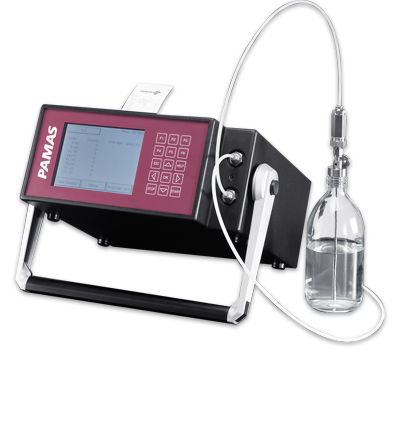 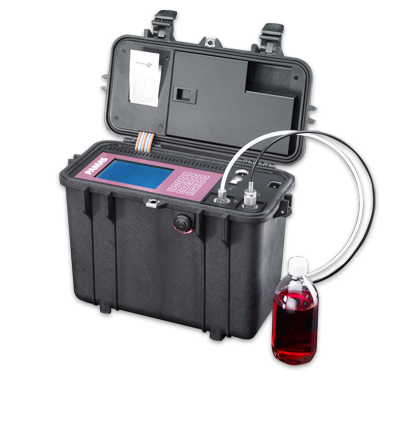 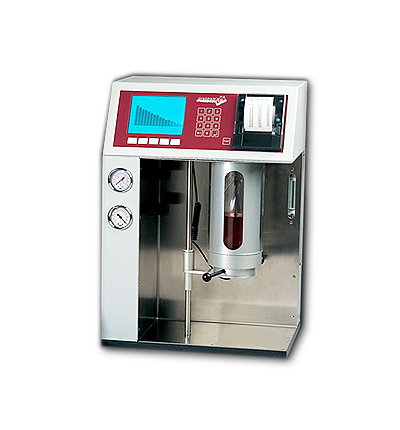