ASTM D2622 covers the determination of total sulfur content in liquid petroleum and petroleum products. Liquefiable at ambient conditions or solubilized in hydrocarbon solvents can be also be samples. Concentration range was obtained from a Interlaboratory study from 3 mg/kg determined as the limit of quantitation LOQ up to 4.6 mass %. Samples containing more than 4.6 % mass S should be diluted with an appropriate solvent to fall within the scope of the study.

Sulfur is not one of the most abundant elements in hydrocarbons but Is a ubiquitous element in different forms in crude oils and their fractions generally present in low concentration levels. The sulfur content broadly distributed across the board increases almost linearly from low levels in natural and refinery gases and naphtha to percentage levels in crude oils and high boiling fractions and residues. In general Sulfur degrades the quality of crudes and petroleum products firstly due to the corrosiveness to installations, secondly to the detrimental effect on health and environment issues like air quality where it is associated to acid rains and thirdly to the detrimental poisonous effect on catalysts in conversion processes towards the increase of valuable distillates for fuel formulations.

There are many destructive and nondestructive methods to measure S in hydrocarbons, however D2622 Is the preferred method for S in Gasoline and ULSD and many more applications as it is a high sensitivity nondestructive technique with minimal sample treatment, wide scope and very low cost of ownership.

A sample prepared according to instrument manufacturer instruction is placed in the X-Ray beam of the spectrometer and the Kα line typical for sulfur at 0.5373 nm is measured. Background intensity is corrected by subtracting from the peak intensity a signal that for a Rh target tube is measured at a recommended wavelength of 0.5190 nm (0.5437 nm for a Rh tube). This corrected intensity is compared to a previously prepared calibration curve (see figs 4 & 5 in the Calibration Section).

The US Environmental Protection Agency has issued a new set of rules aiming at reducing tail emissions and evaporative loss of passenger and truck vehicles. The TIER III gasoline reformulation will contain less sulfur, and higher ethanol with a stricter control of benzene, olefins, RVP and aromatics. The new Motor Vehicle Emissions and Fuel Standards is found in the code of federal regulations 40 CFR Part 80. The protocol pertaining the S content in reformulated gasoline is described in Subpart D, Section 80.47. The protocol has more flexibility now as it permits the use of any method providing it complies with established criteria for accuracy and precision. The new adopted Performance Based Measurement System (PBMS) approach is therefore a Self-Qualification system for reporting experimental results.

The new formulation of Gasoline for 2020 contains no more than 10ppmw Total S and 10 %v Ethanol and the new transportation Diesel known as Ultra Low Sulfur Diesel (ULSD) should contain no higher than 15 ppmw although 10 ppmw maximum limit are currently in effect in Europe, Japan, Israel, New Zeeland and Australia.

Differences in the Carbon – Hydrogen ratios of samples and calibration standards introduce errors in the analysis. High oxygen content coming from ethanol, methanol or FAME’s can also interfere with the determinations. In general materials with compositions different should be analyzed against calibration curves prepared from standards that are either of the same or similar composition.

Micro Z from Rigaku operates with no gases or cooling water. When sample is subjected to a beam of X-rays electrons are emitted and vacancies are created in the K shell. When higher energy electrons occupy the K shell electrons an excess energy is released and measured at specific values (Kα lines) which for S is 0.5373 nm. The optics has been optimized to minimize interferences and bias. 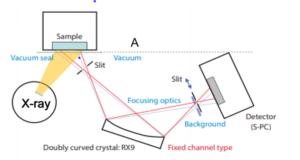 It is strongly advisable to use Reagent Grade Chemicals throughout the test conforming to the specifications of the Committee on Analytical Reagents of the American Chemical Society. STM D2622 calls for the use of D—n-Butyl Sulfide (DBS) for the calibration range of gasoline. Polysulfide oil or Mineral Oil White for higher viscosities calibration curves. The reason being is that the sensitivity of the X-RF technique is dependent on the C/H ratio of the compounds as described in Fig. 3 for various compounds. Consult with Table 1 of D2622 for more information about interference species that might be present in petroleum products. 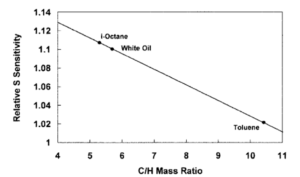 The convenience of this technology to determine Sin liquid fuels is that it is nondestructive, it is a high sensitivity technique with minimal sample treatment and a limit of detection LOD of 0.3 ppm (mg/kg), wide scope and very low cost of ownership (for Micro Z, no gases or cooling water are needed). Important to note is that the calibration is linear over a wide concentration range of several orders of magnitude which means just a few calibration standards are needed to build the calibration curve. This is equivalent to say that the technique has a high linear dynamic range i.e. it does not discriminate low concentration samples for the high concentration values. 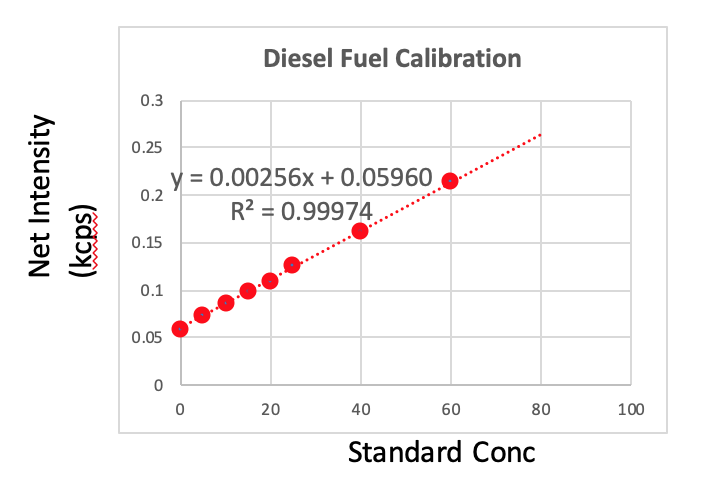 The calibration curve shown above for ULSD demonstrate an excellent linearity with almost perfect fit (R2=1). Due to this linearity response of the detector 4 or five calibration standards will suffice to build a suitable calibration for the same concentration range. The curve also shows a very small offset for the blank.
The Sulfur response however varies a little with the Carbon to Hydrogen ratio (C/H) of the sample being tested for this reason it is recommended to have separate calibration curves for different matrixes so as to always use similar sample and calibration matrixes during the analysis. For more details consult the Rigaku ULS Micro – Z Operation Manual.

Determination of Sulfur by D2622 can also be accomplished utilizing a more powerful instrument like the Rigaku Supermini 200 which is a sequential high performance, high sensitivity benchtop multielement wavelength dispersive analyzer with capabilities to determine any element from Oxygen to Uranium in solids, liquids, powders, alloys and thin films.

The concentration of S in the sample by inserting the corrected net counting rate in the calibration model. See Eq. 8 of D2622.

The concentration of mass% in case of diluted samples can be expressed as Eq.9 of D2622:

Report samples analyzed without dilution as in Eq.8 and the corresponding calibration model described in D2622.

The C/H ratio correction is expressed as:

Swhite Oil = S concentration as derived from the calibration curve

The software from Rigaku Instruments calibrate, correct and calculate all the equations and report the concentration values automatically.

Each Laboratory should have a quality control program to ensure all the measurements are in statistical control as defined in Standard Practice D6299.

Derived from an ILS that involved 27 samples of different viscosities and concentration ranges in accordance with the method scope. Table 1 below presents the calculated values obtained for repeatability and reproducibility. 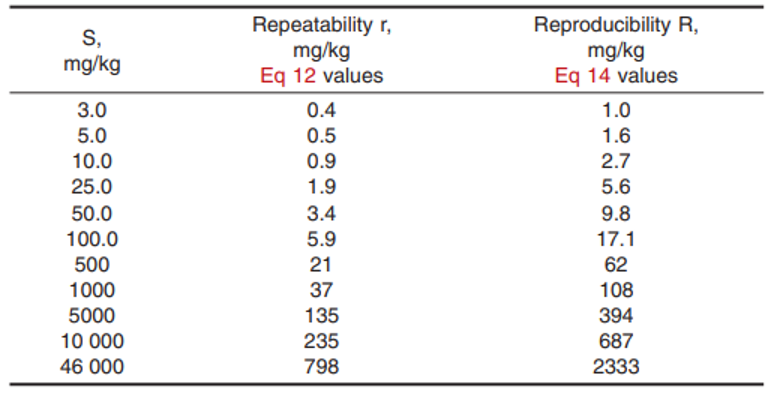 Precision values can be calculated according to the following equations also derived from Research Report: RR: D02-1622. 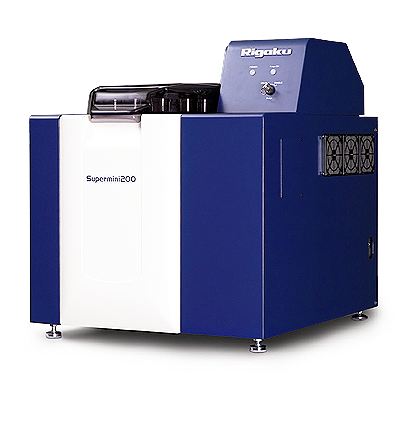