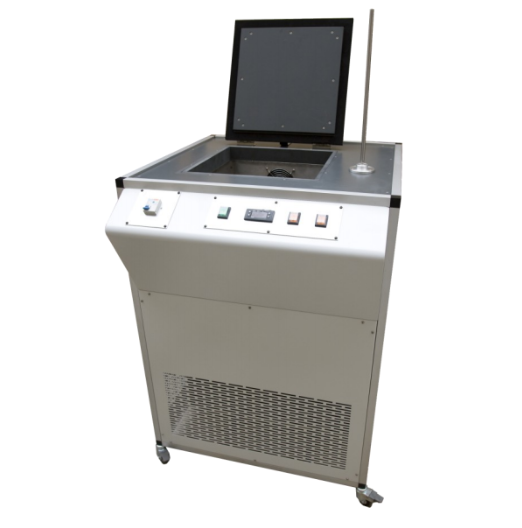 Practical design for the everyday user

Using Windows-based PC proprietary software, two baths can be controlled simultaneously, allowing the baths to operate at two independent temperatures with independent start, stop, and duration times. The operating temperature range of the programmable liquid baths is +20° to -55°C, with a temperature control within ±0.1°C.  The liquid baths are programmed to ensure that sample cooling rates equal the same cooling rates identified when a sample is immersed in the constant low temperature air chamber. The baths also can be programmed to cool at a rate of 1°C per minute from ambient to as low as -55°C as per CEC-L-18A, ISO 9262, and IP 267 for the measurement of European low temperature Brookfield viscosity.

Holding about 3 liters of bath medium, the bath is an unsilvered, illuminated Dewar jar that allows full visibility of the test samples to facilitate the proper position of the spindle bead immersion level. The turntable, which holds 10 test samples, is manually rotated until the proper test cell is under the viscometer after proper conditioning time, The spindle is connected while the sample is in the liquid bath, allowing viscosity measurement without removing the sample from the temperature-controlled environment.

Duplicate samples at -40°C were measured in a Model 76 Liquid Programmable Bath. Of the 56 samples, the average variability between the duplicate samples was ±1.13% of mean. This compares favorably to the method’s stated precision of 11.8%. The key factor in the improved precision is the superior temperature control of the sample as its viscosity is being measured.
See Models  tab for all bench top and floor models.

The following accessories are recommended for purchase in sequential order (see eStore):